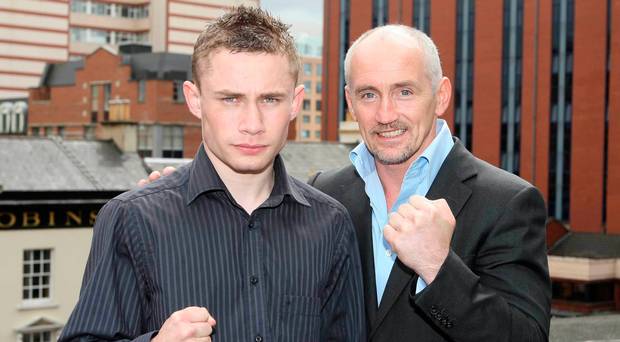 The relationship between Carl Frampton and Barry McGuigan’s Cyclone Promotions traces back to when the Jackal began his professional career in 2009.

Frampton signed on with the promotions company as soon as he turned pro, and the relationship between him and the McGuigans, both Barry and trainer Shane, seemed to be close.

Barry, a former World champion boxer himself, acted as a mentor to the young man from Tiger’s Bay, while Shane provided the training that took him to the top level.

With Cyclone, Frampton won the European super-bantamweight title against Kiko Martinez in February 2013, and then defeated the Spaniard again in September 2014 to win the IBF World title.

Plenty of big fights followed as Frampton added the WBA crown to his IBF belt by defeating Scott Quigg in February 2016, while he also defended his title on two other occasions.

Then came the biggest fight of Frampton’s career as he moved to the featherweight class to take on Leo Santa Cruz, who he defeated in New York to become Northern Ireland’s first ever two-weight World champion.

However, problems in the relationship began to arise after Frampton’s first professional loss to Santa Cruz in their Las Vegas rematch in January of this year.

Although things seemed alright on the surface, the relationship had begun to unravel behind closed doors, and Frampton removed himself as a director of Cyclone Promotions 10 days before his next fight against Andres Gutierrez.

That fight, due to be held at the SSE Arena in Belfast, was cancelled due to Gutierrez slipping in his hotel room and sustaining an injury, the same day Frampton weighed in one pound overweight on the scales.

The Belfast man looked uncomfortable as he was interviewed following the cancellation of the fight, with rumours growing that he was leaving Cyclone for Matchroom Boxing, who represent Michael Conlan.