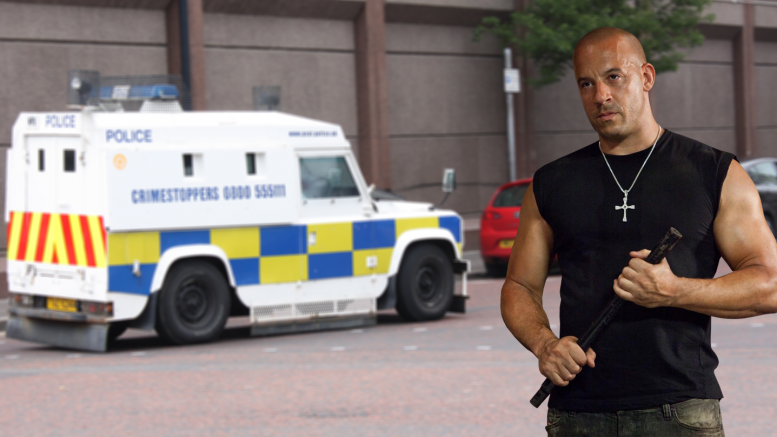 With their eighth globetrotting instalment currently breaking box office records, Vin Diesel has confirmed that the next Fast & Furious movie will be shot in Northern Ireland.

“Toretto’s crew is going back-to-basics!” revealed Diesel. “Their cash is running out, so they’ll be relying on their wits, instincts and ability to spot a clinker at the mid-Ulster auctions to get back on the road!”

His co-star Michelle Rodriguez has also spoken about the project. “Fast 8 was all about spectacular car crashes and mind-blowing stunts.” she told us. “So it’s no surprise that most of us qualify for high-rate DLA now. One of the first scenes is a tense negotiation with John Mulholland over a Motability deal on a Skoda Octavia!”

Other cast members have already flown in for specialist NI driving training. “We’ve been practicing ‘donuts’ on a road outside Aughnacloy” revealed Tyrese Gibson. “Apart from the fact it’s a whole handlin’ driving on the left, all the local wans call them something else.”

“The hurs keep asking us to do ‘Gravy Rings’ FFS!”

The identify of the main villain hasn’t been confirmed yet, but sources indicate that a Dungannon Audi A4 driver who drives up Vin Diesel’s hole between Castledawson and Dungiven will replace Jason Statham as the movie’s antagonist.

“This boy is a proper hallion” revealed Diesel. “In one scene he’s doing 110mph trying to get past me. In another he’s driving through a housing estate at 2mph incase the speed bumps scratch his new alloys. Torreto’s head is pure fried with him!”

“And to make it worse, VOSA keep pulling me into the side of the road to stick a tube down my throat and test what sorta Diesel I really am!”

The Fast, The Slow & The Wile Infuriating will begin shooting this summer.