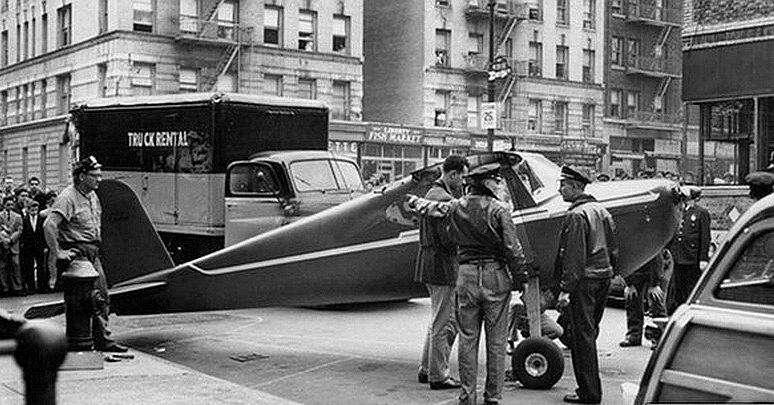 Of course it would have started with the old confidence juice, a few to many drinks in a bar in Upper Manhattan.

I’m sure you can tell by the image below but just to keep you right, no this is not Capt. Chesley Sullenberger who landed a big old jet airliner in the Hudson in 2009, all be it very impressive! No, this is a man by the name of Thomas Fitzpatrick, who turned a barroom bet into a feat of aeronautic wonder by stealing a plane from a New Jersey airport and landing it on St. Nicholas Avenue in northern Manhattan, in front of the bar where he had been drinking.

On September 30, 1956, Thomas Fitzpatrick (below), a 26-year-old steamfitter from Emerson, New Jersey, was drinking at a tavern on St. Nicholas Avenue in Washington Heights.

For reasons that appear to be lost to history, Fitzpatrick bet another bar patron that he could get in a plane and land it in Washington Heights in 15 minutes.

It’s not clear if he did it within the time limit, but he did get a plane, a Cessna 140 two-seater stolen from Teterboro Airport, and flew it to Manhattan, where he landed it on St. Nicholas Avenue and 191st Street at 3 o’clock in the a.m.

Despite being drunk, Fitzpatrick “brought it down safely between six-story apartment buildings,” wrote The New York Times in 1958.

The plane “landed on a street with lampposts and cars parked on both sides,” a witness told The New York Times in a 2013 article. “It was a wonder—you had to be a great flier to put that thing down so close to everything.’’

Fitzpatrick told police that he brought the plane down in the street (below) because he had engine trouble, but they didn’t buy it. Originally charged with grand larceny, Fitzpatrick eventually paid a $100 fine.

That wasn’t Fitzpatrick’s only extreme flying feat. While drinking in Washington Heights again in a tavern on October 4, 1958, he told a patron about his previous escapades of the Upper Manhattan plane-landing experience.

The patron refused to believe him (as would many) Fitzpatrick drove with the man to Teterboro, secured a plane, flew it to Upper Manhattan, and landed on Amsterdam Avenue and 187th Street at about 1 a.m.

“Yesterday’s incident surprised and frightened residents and motorists who heard the plane descending,” wrote the Times. “The craft touched down, taxied a few yards and stopped in front of a Yeshiva University building.”

That second landing put Tom Fitz in jail for six months, after which as far as anyone knows, he never tried to fly to Washington Heights again.