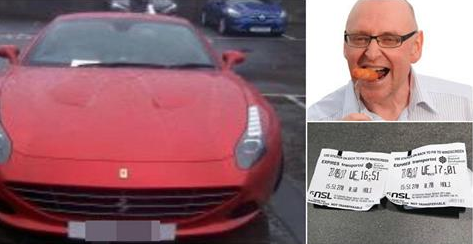 A Ferrari driver from Antrim is raging that his appeal against a parking fines was refused after he left his vehicle between two parking bays – having bought tickets for both.

He bought two tickets at the same time, one to cover each space.

He did it because he says the car is very valuable – and also quite wide for a standard space – and he has had previous experience of his vehicles being damaged when parked in single spaces.

Mr McWhinney was fined £90 for ‘Not parking wholly within the markings of the bay/space’. “Unfortunately after consideration of the circumstances I have found no grounds for cancellation of the charge,” a letter from the unnamed Parking Enforcement Processing manager said.

“The PCN was correctly issued. Your vehicle was not parked completely within a marked bay. Article 5 of the of the Off-Street Parking Order (Northern Ireland) states: “The driver of a vehicle shall not permit it to wait in a parking space other than in a position wholly within a parking Bay where such has been marked.” Mr McWhinney says the reason for the appeal is not for the sake of the £90, but is about seeking common sense, reports the Mirror.

“It’s about not wanting to get dents in the car,” said the Managing Director of McWhinney’s Sausages. “I previously had a BMW that was dented in a hotel car park and the hotel paid for the repairs in the end.

“But since then I have always done this – paid for two spaces – and this is the first time I have ever been fined for doing it in 15 or 20 years.